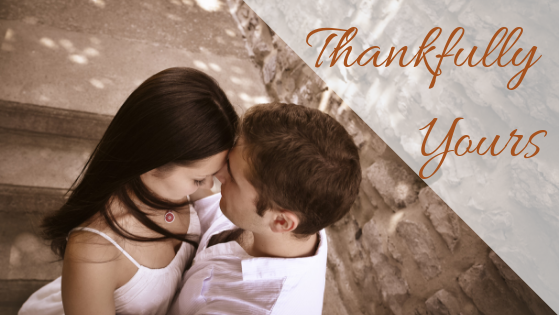 This is a stand alone short story, told partially in text message format.
​Terrence: 149 notifications this morning. 149!!
Terrence: My phone hasn’t stopped dinging since my mom tagged me in today’s “Things I’m Thankful For” post.
Terrence: How does she even know that many people online?!
Kim: ??
Terrence: Oh my God.
Terrence: I texted the wrong Kim!
Terrence: This was (hopefully obviously) intended for my cousin.
Kim: LOL I figured that.
Kim: I’m actually surprised you still have me in your contacts.
Terrence: Well, since you didn’t have to ask who I am, I assume I’m still in yours too?
Kim: Or I might just recognize your number.
Terrence: Do you?
Kim: Nope. I don’t know anyone’s number anymore, lol.
Kim: So I guess I never got around to deleting your number either.
Kim: 149 notifications, huh?
Terrence: Up to 156 now.
Terrence: My mom’s doing that social media thing where she posts something she’s thankful for every day this month.
Terrence: I mean, I’m glad she’s thankful for me 😉
Terrence: I’m thankful for her too.
Terrence: But I’m starting to think she has more friends than I do!
Kim: 😂
Terrence: Sorry for the random text.
Terrence: But it’s good to talk to you.
Terrence: How are you?
Kim: I’m good.
Kim: I’ll be better tomorrow once school’s out for the holiday.
Terrence: School?
Kim: I teach second grade.
Terrence: That’s great! You always said you wanted to be a teacher.
Kim: What are you up to these days?
Terrence: I’m a software developer.
Kim: Is that code for computer geek? 😉
Terrence: Maybe 🤓
Terrence: I code mobile apps. It’s pretty cool. I enjoy it.
Kim: You’ve been messing around with computers for as long as I’ve known you.
Kim: I’m glad you’ve been able to turn your passion into a profession.
Terrence: Remember when I made you that electronic Valentine’s Day card junior year?
Kim: How could I forget?
Kim: I wasn’t impressed at the time, but now I see how hard you must have worked on it.
Terrence: Vindication! ✊
Terrence: Thank you for appreciating my hard work years after the fact.
Kim: 😂
Kim: You’re welcome.
Kim: Still living in Cincinnati?
Terrence: Yep.
Kim: Are you in town for the holidays?
Terrence: Got in last night. Staying with my parents.
Terrence: 161 notifications now BTW.
Terrence: My mom is definitely more popular than I am.
Kim: LOL.
Kim: Seeing anyone these days?
Terrence: Nope. You?
Kim: Sadly, no.
Terrence: What happened to that guy you were dating the last time I was in town?
Terrence: What was his name again?
Kim: Tom.
Terrence: Looked pretty serious when I bumped into you guys at the movie theater.
Kim: Just didn’t work out.
Terrence: What does that mean?
Kim: We tried, but there was no real spark. We’re better off as friends.
Terrence: Ah.
Terrence: Well, my super popular mom is at a church thing tonight so I’m home alone.
Terrence: I was going to head to the bar downtown for a beer.
Terrence: Feel like joining me? Might be fun to catch up in person.
Kim: Yeah, I’d like that, actually.
Terrence: 8 at Brews Brothers?
Kim: That works for me.
Terrence: See you there!

Two hours later, Terrence walked into the bar, his eyes searching for Kim’s jet-black hair. In high school, she’d worn it in a high ponytail that he’d loved to wrap around his fingers when they kissed. When he’d seen her last summer, she’d worn it long and straight down her back.

He turned to see her at the end of the bar, wearing tight jeans and a purple sweater, her black hair now in a short bob that just brushed her shoulders. Something deep inside his chest clenched at the sight of her. “Hi.”

He made his way to the end of the bar, coming to stand beside her. “It’s really good to see you.”

“Same.” She stood to give him a quick hug and a kiss on the cheek.

He sat on the empty stool beside her, allowing his gaze to roam over her, taking in the glint of the overhead lighting in her hair, the way it sparkled in her eyes, and the intricate tattoo snaking down her arm. That hadn’t been there in high school, and he briefly wondered what it would feel like beneath his fingers.

“I’m curious,” she said, a smile tugging at her lips. “Show me your phone.”

“I’ve got to see these notifications from your mom’s post.”

He unlocked his phone and handed it to her. “Over two hundred and counting.”

Kim swiped her finger across the screen, a smile growing on her face. “Oh look, she included a cute baby picture of you too.”

“Mary Evans says she remembers when you helped mow her lawn one summer.” There’s laughter in Kim’s voice now. “And Martha Mayberry says you’re one of the nicest clerks they ever had at the store.” She paused. “Your mom has replied to every single one of the comments.”

He shook his head in mock exasperation. “Oh, believe me, I know. She’s responsible for half the notifications.”

“Oh look, my mom commented too.” She darted a glance in his direction, something other than laughter glinting in her eyes now, something warm and familiar, something he hadn’t seen since high school. “She says you were always a gentleman when we were dating.”

Kim laughed, handing back his phone.

“I don’t think she’d consider the things I did with you in the backseat of my car very gentlemanly, though,” he said, giving her a meaningful look.

“Well, she might not, but I did.” Kim’s expression is earnest. “It wasn’t the most romantic setting, but I loved everything we did in your car.”

The bartender stopped in front of them to take their order. Once Terrence and Kim both had beers in front of them, they settled in and spent the next few hours catching up. There was a lot of laughter. And a lot more notifications on Terrence’s phone, which led to even more laughter.

Kim rested a hand on his arm, her eyes reflecting the warm lighting of the bar. “Tonight’s been a lot of fun. I have to say, I’m really glad you accidentally texted me earlier.”

“I am too. If I’m being perfectly honest, there’s a reason I never deleted you from my contacts.”

He nodded. “I’ve thought about you a lot over the years and regretted losing touch once we went off to college.”

“I don’t know if I could say I’ve thought about you a lot, but—”

“Hey.” He pressed a hand to his chest, pretending offense.

“But I’ve thought about you too! I have.” She bumped her shoulder against his. “And remember what I told you earlier about how Tom and I had no spark?”

Kim’s gaze drifted to his lips. “Well, the way I remember it, you and I never had that problem.”

Terrence leaned closer, reaching out a hand to cup her cheek. “I’d say we still don’t.”

“Definitely not.” Her voice had gone slightly breathless.

“Cincinnati is only an hour away. What do you say we give this thing between us another try?”

“I would say yes, on one condition.”

“You name it.” His heart pounded in his chest, his eyes locked on hers.

“Kiss me first, just to make sure that spark is still there.”

He lowered his head, brushing his lips against hers. Electricity crackled through him, snapping in the air between them. “Did you feel that?”

“I did.” Her cheeks were flushed, a wide smile on her face. “I guess we both have a lot to be thankful for today.”

He grinned. “I’m thankful for my very popular mom. And my sloppy texting skills.”

“And sparks.” She pressed a finger against her lips, holding his gaze.

“Definitely. But most of all, I’m thankful for you.”

And he leaned in for another kiss.